Ban Chomphet Experience Biking and Trekking Tour -This outdoor activity combines cycling, trekking and boating in the rural area around Luang Prabang and along the Mekong. We will experience local daily life and the unique culture while interacting with friendly people of different ethnic minorities and so much more…

Day 1: Luang Prabang – Ban Na Kham – Ban Houay Tan – Ban Mok Prai – Ban Phou Luang Tai
We depart with our bicycles from your hotel in downtown Luang Prabang and cross the Mekong River by boat to Ban Xieng Man village. We then cycle to Ban Na Kham, known for growing sugarcane and cooking sticky rice in bamboo stems. There is time to have a look around and maybe sample this delicious snack. We continue to Ban Houay Tan (a Khmu village). We take a short break to look around, then continue biking to Somsisomphou village for lunch.

After succeeding lunch we switch from biking to trekking. Surpassing some rice fields, we then cross a stream. Trekking 2 ½ hours uphill through Ban Mok Prai, we finally arrive at Ban Phou Luang Tai (both are Hmong villages) where we stay overnight in the home of a local family.

Day 2: Ban Phou Luang Tai – Ban Houay Pong – Ban Muang Kham – Luang Prabang
Following breakfast, we start our second-day trek that passes the forest to Ban Houay Pong (a Khmu village) to relax and have lunch at the hall sustenance built by SNV. We then continue to Muang Kham village, where river weed (a Luang Prabang specialty; only in the dry season) is produced. From here, we take a 20 minutes boat ride back to Luang Prabang.

Note: In the wet season, the road can be very muddy.

Please consider the environment before printing

Departure date: Based on your inquiry

TOP THINGS TO DO IN LAOS

Laos is a treasure trove of natural and architectural wonders. With a little patience and some time you can see incredible man-made and natural wonders from north to south in the Lao PDR. Don’t miss these top 10 things to see and do. 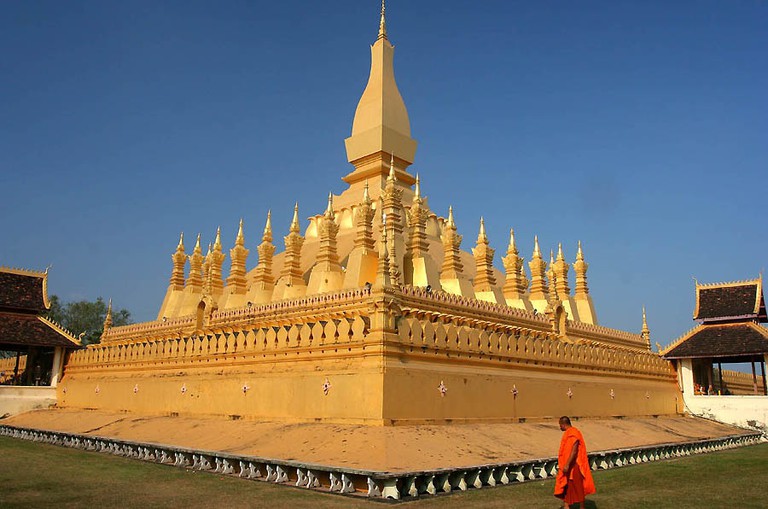 Pha That Luang, Vientiane Laos |
Boun That Luang takes place every November, over three days around the full moon. The stupa in Vientiane is the national symbol of Laos and is said to house a piece of Buddha’s breastbone. Thousands of pilgrims gather at That Luang to give offerings to the monks who come from all over Laos. Processions, parties, and a trade show follow. Even if you don’t make it to the festival, the stupa is a sight to behold any time of year. Join the faithful and place offerings of flowers, candles, and incense at the alter, or quietly stroll around the massive enclosed yard. 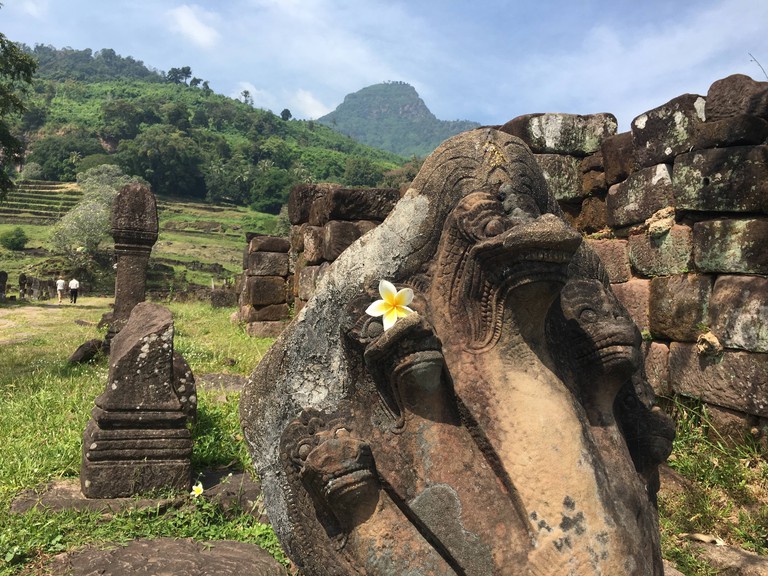 Along with the Champasak Cultural Landscape, the 5th century Khmer ruins of Wat Phou is the second inclusion in the UNESCO World Heritage List of Laos. Wat Phou, meaning ‘mountain temple.’ Blended into the surrounding nature, the remains of Wat Phou are dotted all over the mountain face. Oriented toward the east, the ruins have two large reservoirs on either side of a long column-lined road, leading toward the mountains. Past the palace ruins, up a steep staircase, you’ll find the sanctuary with a modern Buddhist shrine and a natural spring considered to be sacred. 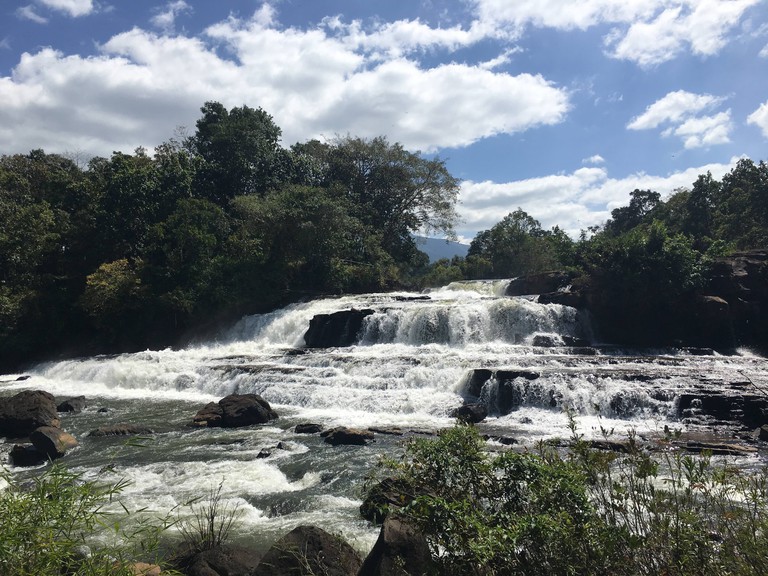 Tad Lo is 56 miles (90 kilometers) away from the southern town of Pakse. Soak in the visual and aural splendor of the falls or take a dip and cool off from the heat. Three cascades make up the falls: Tad Hang, Tad Lo itself, and Tad Suong. Accommodations are available to spend the night and enjoy the surrounding scenery. Tad Lo is an impressive three-tiered waterfall in Salavan Province. Several guesthouses and restaurants around the falls make it an ideal lunch spot or stopover for trekking, swimming, and tubing. Tad Lo is accessible by bus, motorbike, or as part of a group tour package of the Bolaven Plateau.

Swim in the Mekong at 4000 Islands 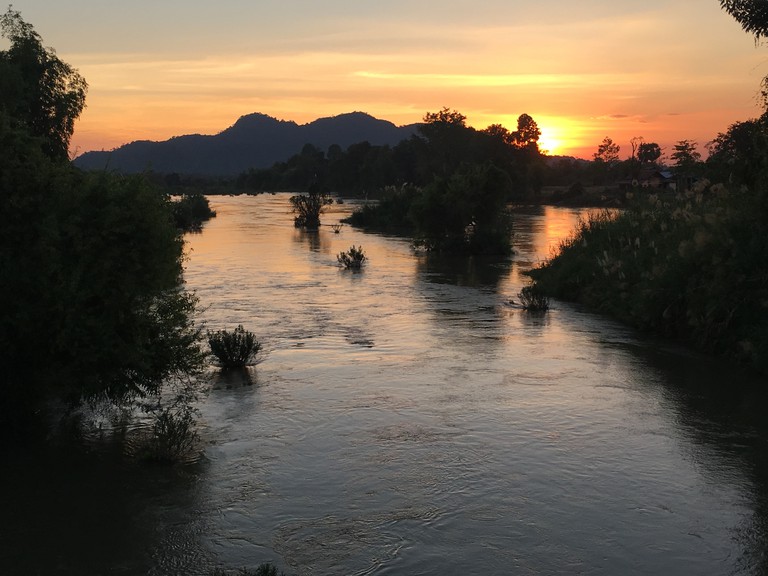 French Bridge at Sunset on Don Det |
Don Det has a beach at its northern tip that doubles as a ferry landing. You can also take a dip in the Mekong, the largest river in Southeast Asia, on either of the two beaches on Don Khon–one by Liphi Falls and one farther south. Easy Go Backpackers Hostel on Don Det has a beach area and Don Som Riverside Guesthouse has a swimming spot on Don Som. If river swimming isn’t your thing and you’d rather lounge by the pool, check out the one by Little Eden Guesthouse at the north end of Don Det or the Blue Lagoon Swimming pool at the southern tip of the island.

Thirty kilometers southwest of Luang Prabang, Tat Kuang Si is a many-tiered waterfall tumbling over limestone formations into a series of cool, swimmable turquoise pools; the term 'Edenic' doesn't do it justice. When you're not swinging off ropes into the water, there's a public park with shelters and picnic tables where you can eat lunch. Don't miss the Tat Kuang Si Bear Rescue Centre, where wild Asiatic moon bears, confiscated from poachers, are given a new lease of life.

Many cheap eateries line the entrance car park at the top end of the Khamu village of Ban Thapene, selling everything from local snacks to grilled chicken and fish.

Visiting Kuang Si by hired motorcycle is very pleasant now that the road here is decently paved and allows stops in villages along the way. By bicycle, be prepared for two long, steady hills to climb. A tuk-tuk from Luang Prabang costs 150,000K for one person, and 50,000K per person in a group of three, so it's best to get a group together. A private minivan will cost 350,000K. 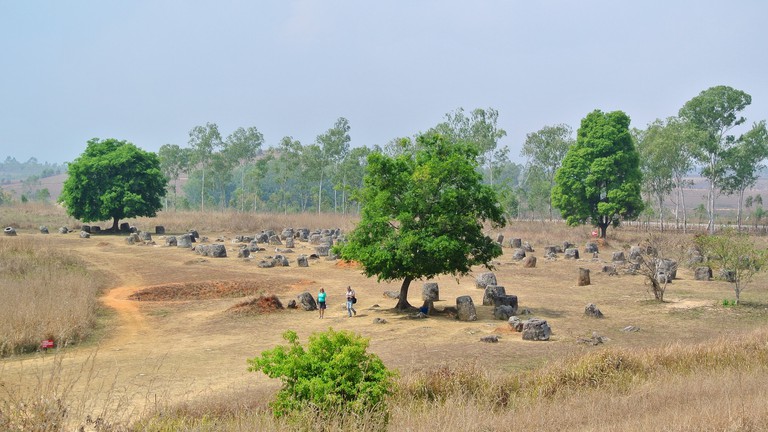 Plain of Jars
Plain of Jars’ thousands of mysterious megalithic jars are scattered throughout Xiang Khuang Province in northeastern Laos. Dating from the iron age, the oldest jars go back to 500 BC. The largest “King Jar” is at Site 1 and the longest jar is at Site 2. It’s possible to hire a guide to take you on a trek from Site 2, which is behind a rice paddy to Site 3, which is in the forest on top of a hill. The leading theory suggests these stone vessels were used in burial rituals. Evidence suggests that bodies were distilled in the jars until only bones remained. The bones were then removed and interred in a ceramic jar or on the ground. Nine of the 90 sites containing jars have been cleared of UXOs, so stick to the established routes and bring a guide out trekking with you. 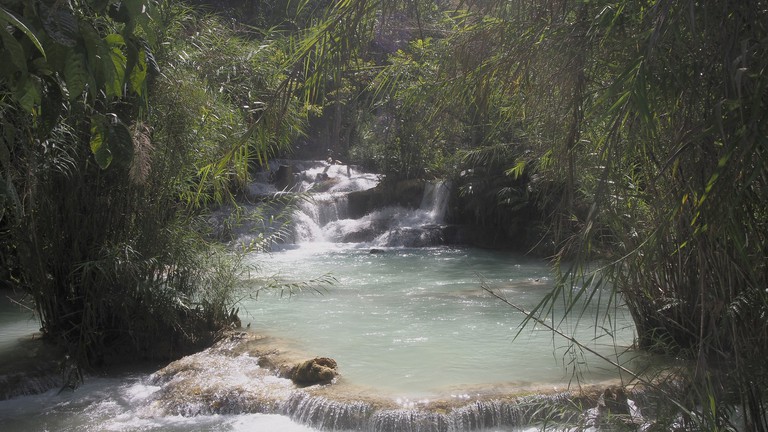 Kuang Si Falls |
In the north of Laos lies Luang Prabang, a portion of the old town that is a UNESCO World Heritage-listed site. Ride or cycle to Kuang Si or Tad Saw waterfalls, take a boat cruise down the Mekong river, and eat local Lao or fantastic French food at one of the restaurants in town. This former royal capital is home to some of the most elaborate and best-preserved temples in the country. Visit the Royal Palace and the watermelon-shaped Wat Wisunarat or hike up Mount Phousi for sunrise or sunset.

The annual monsoon cycles that affect all of mainland Southeast Asia produce a ‘dry and wet monsoon climate’ with three basic seasons for most of Laos. The southwest monsoon arrives in Laos between May and July and lasts into November.
The monsoon is followed by a dry period (from November to May), beginning with lower relative temperatures and cool breezes created by Asia’s northeast monsoon (which bypasses most of Laos), lasting until mid-February. Exceptions to this general pattern include Xieng Khuang, Hua Phan, and Phongsali Provinces, which may receive rainfall coming from Vietnam and China during April and May.
Rainfall varies substantially according to latitude and altitude, with the highlands of Vientiane, Bolikhamsai, Khammuan, and eastern Champasak Provinces receiving the most.
Temperatures also vary according to altitude. In the humid, low-lying Mekong River valley, temperatures range from 15°C to 38°C, while in the mountains of Xieng Khuang can drop to 0°C at night.
When to go
The best time for visiting most of Laos is between November and February when it rains the least and is not too hot. It’s also Laos’s main season for both national and regional bun (festivals).
If you plan to focus on the mountainous northern provinces, the hot season (from March to May) and the early rainy season (around June) are not bad either, as temperatures are moderate at higher elevations. Southern Laos, on the other hand, is best avoided from March to May, when daytime temperatures break into the 40s and nights aren’t much cooler.
The rainy season is not as bad as you might think. While it will rain – very heavily – the downpours are often fairly brief and can be bracketed by long periods of sunshine. The rains also clear dust from the skies and land, making everything clearer and brighter. Of course, there are downsides; unsealed roads can become quagmires, and extensive travel in remote areas like Salavan, Phongsali, and Sainyabuli might be impossible. River travel can be a good alternative during these months. If you intend to travel extensively by river, November is the best; flooding has usually subsided yet river levels are still high enough for maximum navigability. Between January and June, low water can make navigating some rivers difficult.
December to February and August are the peak tourist times. January, in particular, is very busy and booking ahead is advisable.

All transport is involved in the cost. We provide a backup vehicle at all times during cycling trips. The vehicle can be used to boat your baggage & yourself as required.

Food is a very essential part of these trips. We make sure that the meals we offer are method delicious unless you ask for dull meals. You are also permitted the choice of veggie or non-vegetarian meals. We suggest that you consume only the canned standard water. Please make sure that the container is enclosed.